This month, we wanted to explore what investors did during the last period of extended inflation in the US, the 1970s. Did they alter their strategy or materially change holdings? To explore this question, we reviewed Warren Buffett’s annual letters, then and still, Chairman of Berkshire Hathaway.  The below summary represents some key takeaways as well as noteworthy quotes from our review.

Please read on to see more information and direct quotes from Warren Buffett.

We focused on Warren Buffett of course for his preeminence in US equity investing over more than 60 years and secondly, his well-documented annual letter (link below1). The letters were his main form of communication with the public then and provide a consistent “play by play” through the years.

First, it may be helpful for a brief set up on the macroeconomic situation in the 1970s. As described by former Federal Reserve Chairmen Ben Bernanke in his June New York Times op ed, the 1970s were a period where the Consumer Price Index increased by more than 7% per year before peaking at over 13% in 1980. There were two major recessions and over a decade where the S&P 500 only returned 20% in absolute price terms (an annual rate much lower than inflation). The period finally ended following the 1980-1982 recession induced when former Fed Chief Paul Volker famously raised the federal funds rate to over 20%. Following June of 1982, the S&P 500 rallied more than 50% in 12 months and more than 200% over the next 7 years through 1990.

Entering the 1970s, Warren Buffett had just shut down his investment firm, Buffett Partnership Ltd., to focus on running his control investment, Berkshire Hathaway, full time.   His Buffett Partnership was also quite successful. It was organized similar to a hedge fund where he invested in public and private companies and special situations, such as mergers. In 1965, he gained control of Berkshire Hathaway, which was then primarily a textile business based in Massachusetts, after a few years of buying it’s shares in the public markets. The business of Berkshire Hathaway would go on to diversify into insurance and banking in the 1960s. It wasn’t lost on Buffett that the original textile business which gave Berkshire its name was his worst business and would eventually be shut down.

So, what did Warren Buffett do when he encountered the severe inflation of the 1970s?

The answer – basically keep investing. Between the years of 1975 and 1980, he more than doubled the money Berkshire had invested in public equities (or marketable securities as Buffett referred to it) from $135mm at cost to $325mm at cost. As money came in from Berkshire’s insurance business, Buffett steadily reinvested those funds in more stocks.  It was during those years that he first acquired two of his most notable investments, GEICO and the Washington Post, then both publicly traded companies (GEICO was not fully consolidated by Berkshire until 1995).

What were his comments on inflation?

In the late 1970s and 1980s, Warren Buffett repeatedly wrote about the destructive forces of inflation on capital returns. In his 1979 letter, he described the issue: “When this [inflation] index exceeds the rate of return earned on equity by the business, the investor’s purchasing power (real capital) shrinks even though he consumes nothing at all.  We have no corporate solution to this problem; high inflation rates will not help us earn higher rates of return on equity…We intend to continue to do as well as we can in managing the internal affairs of the business.  But you should understand that external conditions affecting the stability of currency may very well be the most important factor in determining whether there are any real rewards from your investment in Berkshire Hathaway.”

Despite his frankness, he was quick to point out that short-minded decisions are not likely to pay off. In 1980, he wrote how his insurance competitors would regularly sell stocks with gains rather than take losses on bonds that were underwater – “This ostrich-like behavior - selling the better assets and keeping the biggest losers - while less painful in the short term, is unlikely to be a winner in the long term.”

What was his equity strategy? Did he change his allocation?

Buffett did not alter his equity strategy during the 1970s. He generally maintained his sector focus and did not deviate into new areas, such as oil, to avoid inflation. In the 1970s, his investments were primarily made in the insurance, media, and materials industries. In the early 1980s, he added two consumer staples businesses, acquiring shares in RJ Reynolds (tobacco/consumer) and another food products business.  That is not to say he wouldn’t add industries to Berkshire’s portfolio as he got up to speed on them - he added a utility in 1999, the Burlington Northern (BNSF) railroad company in 2009 and his investment in Apple in 2016. However, in the 1970s, he didn’t deliberately add sectors he described as benefiting from inflation.

He described his strategy succinctly in his 1977 letter: “We select our marketable equity securities in much the same way we would evaluate a business for acquisition in its entirety.    We want the business to be (1) one that we can understand, (2) with favorable long-term prospects, (3) operated by honest and competent people, and (4) available at a very attractive price.”

Fundamental long-term growth was key for Buffett. Whether it was Berkshire’s core insurance business, National Indemnity, which saw a material increase in annual premiums over the course of the 1970s, GEICO, or his media investment in the broadcast company that would go on to become ABC Networks, now part of Disney – all companies operated in large markets with multiple years of industry tailwinds behind them.

He said of GEICO in the 1980 letter: “GEICO represents the best of all investment worlds... GEICO was designed to be the low-cost operation in an enormous marketplace (auto insurance) populated largely by companies whose marketing structures restricted adaptation.  Run as designed, it could offer unusual value to its customers while earning unusual returns for itself.”

How were his results in those days?

From 1970 to 1979, $1,000 invested in Berkshire would be worth approximately $7,500 by the end of the decade compared to $1,750 for the S&P 500 including dividends (per Berkshire Hathaway’s performance data in its 2021 letter).  This outperformance would only magnify as markets recovered in 1983. That’s not to say there weren’t bad years. From 1973-1975, Berkshire Hathaway’s equity was down about -47% to the S&P 500’s flat return.  Throughout the letters, Buffett readily acknowledge periods of poor performance at his companies, but he was aware that some industries would have good years and bad years and he focused on winning positions. See the chart below for more detail.

What has Buffett been doing this year?

In short, he has been buying. He has increased positions in over 20% of the Berkshire portfolio representing over $40 Billion in new money, or a little over 10% of Berkshire’s $325 Billion portfolio. He has only decreased positions on less than 0.2% of his portfolio (these are round numbers per Bloomberg data as of Q2 filings). He has been acquiring shares in the oil industry through Occidental Petroleum and Chevron, but he has also added multi-billion-dollar stakes in Paramount, HP Inc., and Activision. Filings for data through Q3 are not out but we would note Berkshire’s expected successor, Greg Abel, who oversees all the non-insurance businesses, recently acquired $70 million dollars in Berkshire stock at the end of September – his only major buy since 2018.

Staying invested is a key for him. In his annual letter from this year he remarked, “I always kept at least 80% of my net worth in equities. My favored status throughout that period was 100% – and still is. Berkshire’s current 80%-or-so position in businesses is a consequence of my failure to find entire companies or small portions thereof (that is, marketable stocks) which meet our criteria for long-term holding.”   Finding companies with good long-term growth prospects, at attractive valuations, that don’t require a lot of incremental capital to grow, with great management teams, and at the size Berkshire needs to be impactful (billions of dollars) is perhaps not as easy as it sounds.

Warren Buffett’s letters are excellent, and it was surprising how many concepts he tackled even in the 1970s. He was regularly writing about the limits of accounting practices to capture the value of Berkshire’s owned subsidiaries and equity investments, reminiscent of today’s discussions on adjusted earnings. He was even in favor of share repurchases as far back as 1980.

We found it instructive to note that despite strong macro headwinds in the 1970s, Warren Buffett’s philosophy was consistent and focused on investing in and staying investing in great companies, some of which he found at onset during those times. 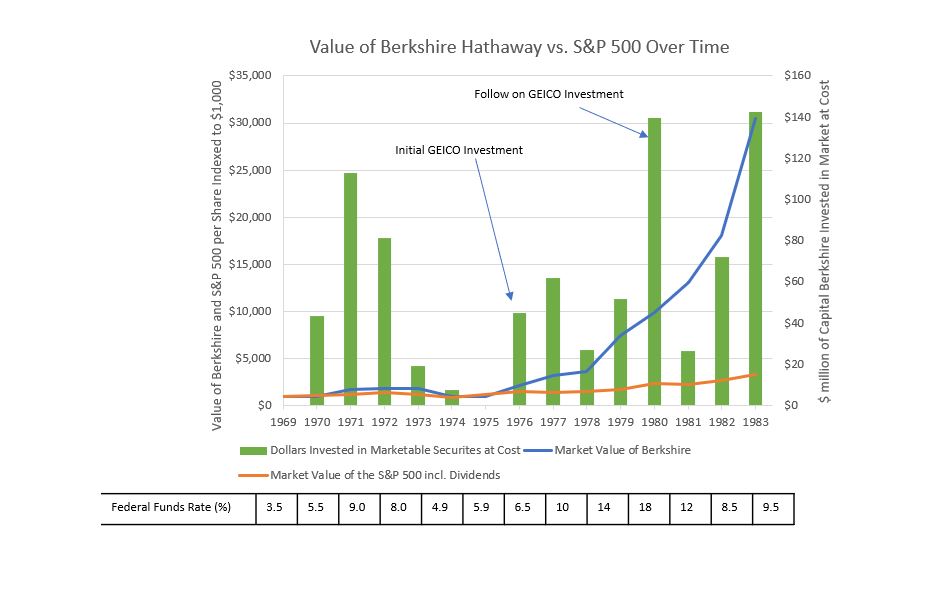 Figure 1: Buffett invested throughout the 1970s, putting money into public equities in the harshest of macro environments when inflation was particularly steep in 1979 and 1980.